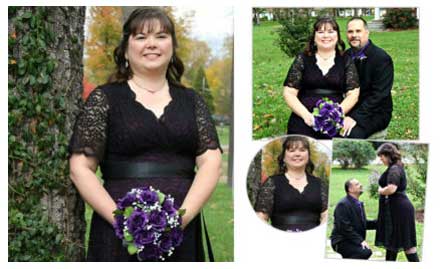 Location: Speed Park in Sellersburg, IN

How did he ‘pop’ the question?: Troy is a very sentimental and romantic man. We attended my junior prom when we dated the first time. Late on prom night, I broke out with chicken pox. To comfort and take care of me during my week out of school, Troy gave me his beloved childhood bear “Tootie”. To the very day, 24 years later, on April 17, 2012, Tootie Bear asked me if I would marry Troy. Tootie was sitting on the pillow on the bed with a note and an empty ring box to assist in this proposal! I went into the kitchen where Troy was with the note and empty box asking where is what goes in this box and of course to say yes!

How did you meet?: We actually met the first time in October 1987 at the house of my mom’s old high school classmate. Troy and I were each other’s first love. On January 24, 2012, we reconnected via Facebook. Troy sent me a message saying, “Hello, bet you didn’t expect this! Maybe we could talk sometime?” He was right. That message was not what I expected at all that day! After that, we spent a lot of time chatting on Facebook, texting and finally talking on the phone. On February 4, we met in person at McDonalds for a cup of coffee. We were there for five hours!

Looking back – Wedding memory: I hold dear and will never forget or take for granted that I married my first love, my one true love 25 years later to the month after we first met. It was amazing to share this with family and friends that knew us back then.

Tell us about your Kiyonna dresses: I had decided from the beginning that I was not going the traditional wedding dress route. I wanted something that I could wear again and that had an affordable cost. I found both of these at Kiyonna.com. I looked at many dresses but as soon as I saw the Retro Glam Lace Dress, I knew that I had found the dress I wanted to wear on my wedding day. Immediately it reminded me of the dress with black lace and blue lining I wore all those years ago when Troy and I attended my junior prom.

What is an un-traditional thing you did?: I think overall that the entire ceremony was un-traditional. First, Tootie Bear had his part in the day, appearing in some of the photos! We did not have a best man or maid of honor. We just wanted family and close friends to celebrate our day.